75.61-Carat Emerald Once Worn by Catherine the Great Is Up for Sale at Christie’s

A 75.61-carat emerald worn more than 220 years ago by Russian Empress Catherine the Great will be hitting the auction block at Christie’s Geneva a week from Wednesday. The spectacular verdant gem, which was daringly smuggled to England by a James Bond-like character during the Russian Revolution, carries a pre-sale estimate of $2.3 million to $3.5 million. 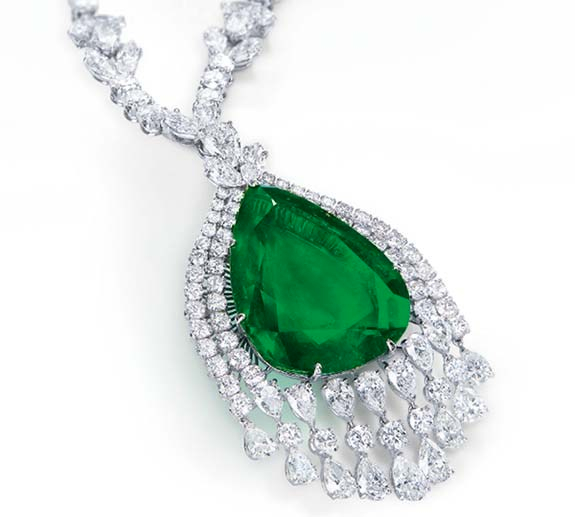 Credited with revitalizing the country and making it into the world’s largest and wealthiest empire, Catherine the Great ruled Russia from 1762 until 1796. Not only was she the longest-ruling female leader of Russia, but she was arguably the most fashionable.

In his book The Jewels of the Romanovs, Stefano Papi wrote, “Catherine was one of the greatest collectors of all time, in both scale and quality. She took great pleasure in the jewels that proclaimed her power and her rank as empress. Uniquely precious and suited for imperial elegance, Catherine the Great was particularly fond of emeralds.”

When Catherine wore this emerald in the late 1700s, it bore little resemblance to the gem you see today. It originally weighed 107 carats and had a rectangular shape.

After the Empress passed away in 1796, her cherished emerald was passed down to her children, and eventually to Tsar Alexander II, who gifted the stone to Duchess Marie of Mecklenburg-Schwerin upon the marriage to his son, Grand Duke Vladimir, in 1874.

Like Catherine the Great, the Grand Duchess Vladimir was famous for a great sense of style and an impressive jewel collection, which now included the 107-carat emerald.

The Russian Revolution in 1917 would force the Duchess to quickly flee St. Petersburg to the southern Russian border town of Kislovodsk with only a few “daytime jewels and strings of pearls.” All the rest of her jewels would remain behind in the palace, stowed away in a safe, concealed between her wardrobe and her dressing room.

According to Papi’s book, the Duchess confided in Albert Stopford, a well-known high society Englishman in St Petersburg. Acting as an unofficial secret agent, Stopford reached the safe with the assistance of a loyal palace caretaker and, using a false identity, smuggled the jewels from Russia to Great Britain on the Duchess’s behalf. The jewels were hidden in his suitcase.

After the Duchess’s death, her family members were forced to sell many of the jewels to support themselves. Cartier purchased the emerald from her descendants in 1927, and 27 years later, the notable jeweler would recut the gem into the current pear shape to improve its clarity. The gem was soon purchased by John D. Rockefeller Jr. and it remained in that famous family until 1971.

For the past 48 years, Catherine the Great’s gem has been in the hands of private collectors. Next Wednesday, the fascinating emerald, which now dangles from a contemporary diamond necklace, will start a brand new chapter. And don’t be surprised if Lot 269 smashes Christie’s high estimate of $3.5 million.