Featuring 36 cushion-cut Sri Lankan sapphires totaling 195 carats, the spectacular “Hall Sapphire Necklace” is the next stop on our virtual tour of the Smithsonian’s National Gem Collection, which resides in the Janet Annenberg Hooker Hall of Geology, Gems, and Minerals in Washington, DC. 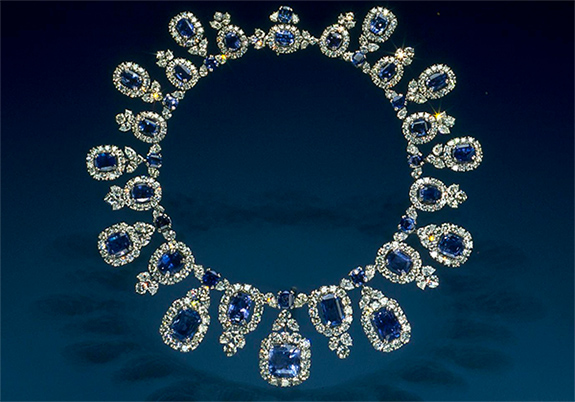 The platinum necklace — a gift to the Smithsonian in 1979 by philanthropist Evelyn Annenberg Hall — is accented with 435 pear-shaped and round brilliant-cut diamonds boasting a total weight of 83.75 carats.

(Evelyn Annenberg Hall is the younger sister of Janet Annenberg Hooker and, interestingly, both women have “Hall” connections. Evelyn’s last name is Hall, while Janet has a “Hall” named in her honor. The sisters share a famous brother, Walter Annenberg, who owned and operated Triangle Publications, which included TV Guide, The Saturday Evening Post, The Atlantic Monthly, Essence and Seventeen magazine.) 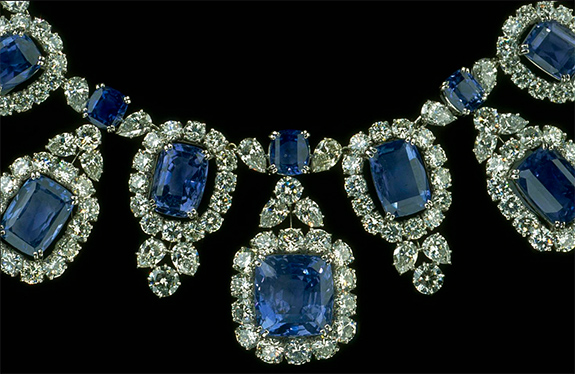 Designed by luxury jeweler Harry Winston, the Hall Sapphire Necklace is arguably the most lavish of the three eye-popping sapphire pieces featured in a display called “Rubies and Sapphires.” The other two are the 423-carat “Logan Sapphire” and the 98.57-carat “Bismarck Sapphire Necklace.”

While the Smithsonian museums in Washington, DC, remain temporarily closed in an effort to contain the spread of COVID-19, we continue to present these virtual tours of the finest items in the National Gem Collection. Previous stops have included the “Victoria-Transvaal Diamond,” “Carmen Lúcia Ruby,“ “Chalk Emerald,“ “Gifts from Napoleon,“ “Stars and Cat’s Eyes,“ “Logan Sapphire,“ “Dom Pedro“ aquamarine, “Steamboat“ tourmaline and a grouping of enormous topaz. 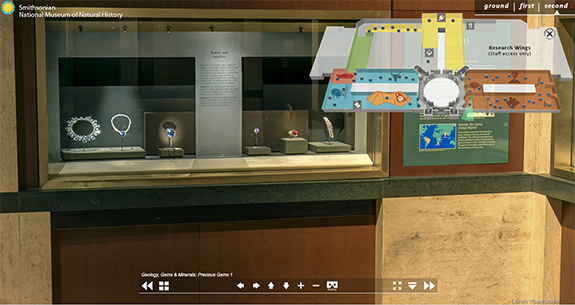 Here’s how to navigate to the exhibit called “Rubies and Sapphires.” The first item in the case is the Hall Sapphire Necklace.

The resulting page will be a gallery called “Geology, Gems & Minerals: Precious Gems 1.”

When you arrive, the foreground in the center of the screen will show a four-sided glass case housing a topaz exhibit. Visible to the right of the topaz display, on the back wall, is a partitioned showcase called “Rubies and Sapphires.” The sapphire items are on the left and the ruby items are on the right.

– Click and drag the screen slightly from right to left and then touch the Plus Sign to zoom in. There you will see the Hall Sapphire Necklace.

(You may touch the “X” to remove the map. This will give you a better view of the jewelry. You may restore the map by clicking the “Second” floor navigation on the top-right of the screen.)

The Hall Sapphire Necklace displays three dozen well-matched sapphires of impressive size and quality. As the Smithsonian notes on its website, Sri Lanka has been an important source of sapphires, rubies and other gemstones for more than 2,000 years. The sapphires from this area are famous for their soft, sky-blue color.

The Smithsonian also explained that the precious stones from Sri Lanka have eroded from the country’s central mountains and are picked by hand from alluvial ground deposits.